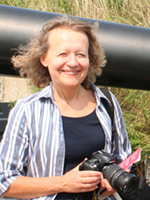 Prof. Dr. rer. nat. Elke Zimmermann, the director of the Institute of Zoology of the University of Veterinary Medicine Hannover, Germany, died on 25th July 2019 prematurely at the age of only 61.

She grew up in Stuttgart, Germany, and discovered her love for nature at a very young age. As a young adult she had already developed her scientific skills, winning the prestigious German scientific competition "Jugend forscht" and breeding frogs in her parent's house.

She studied biology between 1977 and 1982 and completed her PhD in 1985 at the University of Hohenheim, Stuttgart, supported by a highly competitive stipend of the Studienstiftung des deutschen Volkes. Although her PhD still focused on neotropical frogs (behavioural physiology of acoustic communication in poison dart frogs), she soon broadened her scientific scope and completed her habilitation in 1990 on the "Acoustic communication of animals".

It was during this time that she established one of very few successful breeding colonies of grey mouse lemurs (Microcebus murinus), which stayed with her for the rest of her life. This decision profoundly shaped her professional career, and the grey mouse lemur and subsequently other nocturnal lemurs became her most important study species for the next two decades.

After two years of working as senior scientist in the working group of Prof. Markl at the University of Konstanz, she moved to the German Primate Center (DPZ) in 1992, while being financially independent thanks to a Heisenberg Stipend of the Deutsche Forschungsgemeinschaft. She installed the working group "Biocommunication" at the DPZ, and from 1994 onwards she initiated a long-term field project on nocturnal lemurs in the Ankarafantsika National Park, Madagascar. This project is ongoing and was co-directed for more than 10 years by her and one of her first PhD students, Ute Radespiel. She and her field students worked on a wide range of topics ranging from socioecology, reproduction, seasonality, and health to the communication and evolution of mouse lemurs, sportive lemurs, and woolly lemurs. The resulting publications of members of the Zimmermann working group have substantially increased our present knowledge on the species diversity, lifestyles, and adaptations of nocturnal lemurs in Madagascar.

After only a few years of working in Ankarafantsika, she was the lead author on the description of a new mouse lemur species, Microcebus ravelobensis (Zimmermann et al., 1998) and afterwards contributed substantially to further species descriptions of mouse lemurs and sportive lemurs. Her work on species-specific acoustic repertoires, in particular our growing understanding of loud calls (sportive lemurs) and advertisement calls (mouse lemurs), pointed to the importance of vocalizations in the context of mate search and ultimately in the speciation of cryptic species. She was also one of the first to analyse the vast ultrasonic acoustic repertoires of mouse lemurs by means of various generations of highly sensitive acoustic recording techniques.

She established a second breeding colony of mouse lemurs in 1996 at the DPZ, this time one for the Goodman's mouse lemur (M. lehilahytsara). This species served as a comparative model to the grey mouse lemur and improved the understanding of phylogenetic constraints and behavioural plasticity in these two small primate species. A breeding colony of Tupaia belangeri, a closely related out-group to primates, complemented the research opportunities in the Zimmermann working group.

Elke Zimmermann took a professor ordinarius position at the Institute of Zoology in Hannover in 1996, which she kept until her death. After all three breeding colonies were transferred to Hannover, a multitude of studies were conducted on them over the next 22 years. Topics ranged from aspects of reproductive biology, female dominance, health, and lateralization, to her main academic interest: the evolution of acoustic communication, communication of emotions, hearing, and the dynamics of cognitive performance across different life stages. Besides this, Elke Zimmermann also supervised other primatological projects on apes, galagos, and proboscis monkeys in continental Africa and Borneo. However, she will always be remembered as one of very few world experts on the acoustic communication of nocturnal lemurs.

Overall, her scientific legacy consists of more than 170 scientific publications and she supervised more than 40 doctoral students and more than 50 master and bachelor students.

Besides her scientific research, she was also a member of many scientific societies, including the International Society for Primatology and the Gesellschaft für Primatologie, of which she was chair between 1998 and 2001. She was a member of the scientific board of the German Primate Center between 1998 and 2006 and served on the Editorial Board of Primate Biology since 2014. She was highly esteemed by her international and national collaborators, colleagues, and the members of her working group.

We will miss a consummate scientist with a profound interest in primates and lemurs in particular. Elke Zimmermann was an ever helpful teacher and mentor, and a supporting pillar of the Institute of Zoology. She left too early and will not be forgotten.